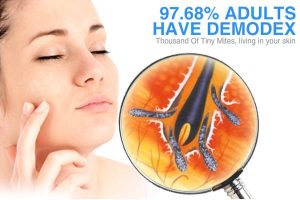 Demodex infestation can develop in several stages; each of them has its own symptoms and signs: the early stage – infestation with demodex, the intermediate stage – high demodex infestation and the late (severe) stage – demodicosis, a disease caused by demodex mites.

Symptoms: wide pores, rough skin
What do we see under the microscope at this stage? The inflamed skin pattern: demodex mites are present in follicles and glands, around which there are lymphocytes and cell infiltration.  Recommended treatment: Demodex Complex soap, Kang cream, Demodex Complex tea.

Symptoms:
1. Redness in the “demodex triangle” area – localized on the wings of the nose and going down to the adjacent areas around the mouth and on the chin.
2. Itching that may be accompanied by pain in acute conditions. Greasy skin.
3. Pimples, acne, boils, pustules, papules, large and small nodules, purulent lesions.
4. Wide pores. The skin is very greasy and rough, openings of the hair follicles are enlarged, resembling the orange peel texture.
5. Hair loss, even baldness. Demodex mites can cause hair loss. These parasitic mites suck nutrients from hair roots and damage the cell walls.
6. Eyelash loss and blepharitis. The excessive number of demodex mites can cause thinning of eyelashes, their loss and inflammation of follicles of eyelashes – blepharitis. When 1-2 subcutaneous mites are found on 16 eyelashes, the person is diagnosed with demodex infestation; when 4-5 demodex mites are found on each lash, it means the occurrence of excessive parasitism known as blepharitis.
7. Bulbous nose (the medical term is “rhinophyma”). If at early stages the treatment is neglected, later on the person may suffer from this quite common disease. The skin of the nose is hypertrophic, congested, rough and thickened, forming large nodular masses that may be covered with pitted scars.

What do we see under the microscope at this stage? The biopsy of the skin affected by demodex: the microscopic cross-section shows four demodex mites in the enlarged hair follicle. Chronic granulomatous inflammatory cell infiltration.